For the first time in almost two weeks, we didn't have to out-the-door by 7:45 so fellows started their day in different ways.  Some caught up on sleep while others went on an early hike with our guide, Sanjay Nepal (yes, that is his given surname), to watch the sun rise over the Himalayas.

Across the Bagmati River from the Temple is Pandra Shivalaya, a series of 15 votive shrines that were built between 1859 and 1869. 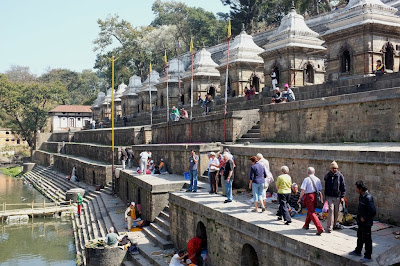 Around the Pandra Shivalaya were a number of Sadhu Babas, whom are ascetic Hindu monks.

In addition to the beautiful architecture of the Temple and the votives, we visited the site because the Bagmati River is one of Nepal's most sacred rivers and where public cremations are performed every day.
After our visit to the Bagmati River, we headed to the US Embassy in Kathmandu where Matt Hughes, an Economics officer assembled a terrific panel of experts to discuss Nepal with us.  Some of the most interesting things we learned:

After the embassy visit, we walked around downtown Kathmandu.  We ended our evening at a restaurant with traditional Nepalese food and dance.


Posted by California Agricultural Leadership Program at 11:52 AM