We woke up Sunday to clear and sunny skies, which was a welcomed change from the drizzly weather Saturday.  Chandigarh is regarded as the most beautiful city in India.  The city was formed after the partition of British India into India and Pakistan approximately 60 years ago.  On our way to tour the Rock Garden we felt like we were in a whole different country; this city has little to no trash on the street, the vehicles and pedestrians follow traffic laws most of the time, and there's little to no honking.    The reason for this contrast is that Chandigarh was the first city to be designed before it was built, with collaboration from American, French, and Indian architects and engineers.  The Rock Garden of Chandigarh is a sculpture garden, also known as Nek Chand's Rock Garden after its founder Nek Chand, a government official who started the garden secretly in his spare time in 1957.    This park "rocked"! 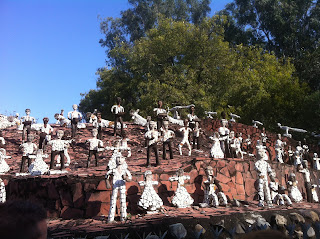 After the tour, we met with the Agricultural Minister of Haryana  P.S. Chauhan and his delegation.  We learned that 85 percent of the total land in Haryana is under cultivated agriculture.  This is a very productive state, accounting for 70 percent of India's agriculture exports.  The largest crops grown are rice, bajra(another cereal crop), wheat, mustard(cooking oil), and cotton.  Labor costs are $5 per day for field labor.  The Chandigarh government is in the forefront of government regulation and implementation, so why have we not seen similar results in other states? 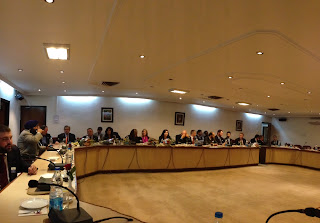 While in Chandigarh we experienced their shopping districts first hand for a couple of hours in district 17 and district 22.  We got to practice business transactions, negotiation, and patience while attempting to push through a sea of shoppers.  There is no concept of claustrophobia in India, another drastic contrast to our culture’s respect for personal space. 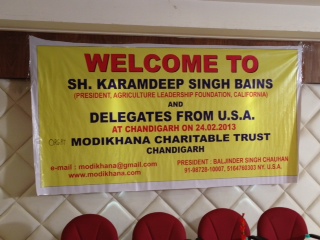 For dinner we were hosted by a delegation from the Modikhana Charitable Trust.  This business meeting was with Indian business men that are looking into investing in the US for different purposes: educational, business diversification or citizenship.  One of the highlight of this meeting was hearing from councilor and ex mayor Bibi Harjinder Kaur ji.  To this point of our trip she has been the only women government official that we have met.  It was another full and rewarding day.
Posted by California Agricultural Leadership Program at 9:16 AM