First day, we arrived at the early our Hotel Connaught in New Delhi and had an early morning start seeing old Delhi. Our first stop was at the Mahatma Gandhi cremation  memorial.  Our tour guide Roger from UDay Tours and Travel picked us on a up and guided us through old Delhi on a tour bus. Driving through New Delhi was everyone's first experience and introduction to India.  Lots of honking, rickshaws, bikes, motor-cycles and people walking through.  It all can be summed up as organized chaos (as our tour guide roger explained).

When we made it to the Gandhi cremation memorial the loudness for the city seemed to just die out as we walked closer to the memorial. It was green with lots of grass and flowers...a contrast to the city we just drove through. Although it was sprinkling for our first day, we did have the opportunity to walk down to the actual memorial.  Most of us braved the water, took off our shoes and walked barefoot to the memorial. The feeling in this area was a feeling of serenity. 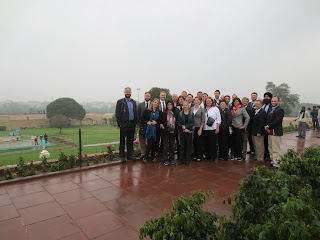 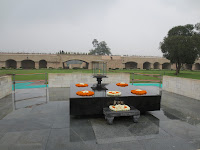 After our visit to the Gandhi memorial...and taking time for a few of the fellows playing with a cobra... we drove past the Red Fort which was built in 1648 by Mughal emperor Shahejehan. 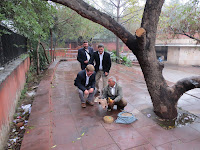 As our tour ended of the Red Fort, we went to the the second largest mosque the world, Jama Masjid. The representation of the mosque left a cultural mark on Old Delhi.  The architecture was beautiful and it paid homage to the Islamic culture even with a bit of influence from the Hindu culture. 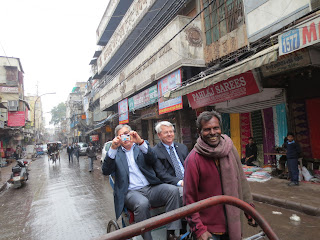 Soon after the visit at the mosque, we paired up and went on a rickshaw ride in Old Delhi. Definitely a quick glance of Old Delhi that was a memorable experience due to the fact that you could smell, see up close and almost touch (and have a few close encounters with buses or other rickshaw-fellows Jason & Denise) the city.

After our day in Old Delhi we went to the British High Commission to meet with Julian Evans. He gave a great representation of the economics of India along with his experience as a commissioner. He also  gave us perspective of what else we were going to experience in India and was open for a questions interaction. We are all very thankful to the British High Commission for hosting us and appreciate their hospitality. 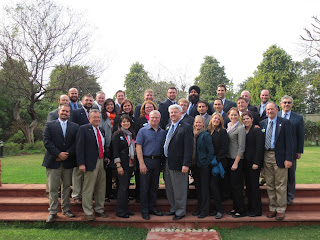 Next we were able to experience the India gate and our first shopping trip in Old Delhi at the Chandigarh Chowk. It was about a five story building that had jewelry, clothes, scarfs, household items to statues to place in your yard. Some of is us we're able to buy scarfs, pillow cases and have the opportunity to bargain with the locals. 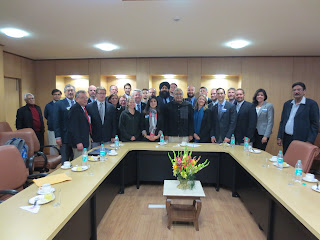 Our day ended with a trip to meet with a member from parliament Bhupinder Singh Haryana. It was an reception were we had the opportunity to introduce ourselves and get to know the Indian parliament as well, we ended up setting up an additional meeting on February 24 in Punjab. Karm Bain played a huge role on setting this meeting up for our class and we are thankful for his assistance and presence on our travel seminar.


Our first day was an enriching experience that ranged from paying your respects to Gandhi, to experiencing the different smells of the city-depending on where you are, to learning more about the history of the city.

Even after just the first day, in Ag Leadership fashion this trip is already an experience unlike any other we have experienced.

Posted by California Agricultural Leadership Program at 10:49 AM